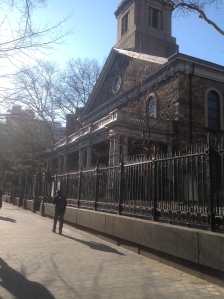 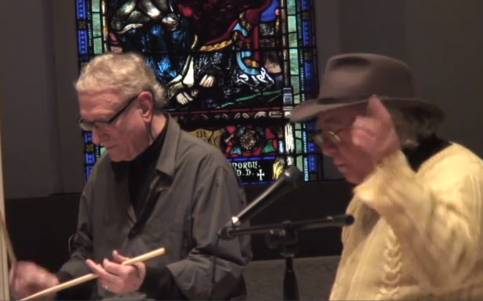 George Quasha and Chuck Stein perform at the Memorial for Madeline Gins, 29.03.2014, St. Mark’s in the Bowery, NYC

Axial music is a practice Quasha and Stein have kept for many years and thereby shown, on evidence of regular generous live performances, how improvisation on the axial principal can serve up procedurality in great doses.

Behind axial music is the axial principle, and behind Quasha’s “principle-based” practice a poetics beyond conceptual, targeting an agency “initiating other levels of action”. “Principle” in Q+S’s practice nears “procedure” in A+G’s procedural architecture, for them a practice beyond poetics. For more on this read on . . .

George and Charles performed axial music again for The Proceeding Procedure an event to go forward with the legacy of Arakawa and Gins, held at Glasshouse in Williamsburg, June 6 2014. There they shared their thinking on the axial principle and how it activates other levels of action. During an afternoon exercise discussions on Saturday June 7, devoted to the topic “architectural body”, George shared a simple exercise for keeping on the ball the way the axiality principle advocates, teaching everyone interested how to continually relocate that special off-balance balance that is at the core of Tai Chi and other life-increasing practices.

ABOUT THE AXIAL PRINCIPLE AND A PRINCIPLE POETICS:

“I look at the A/G work as an instance of what I call principle poetics in contrast to conceptual poetics. Principle performatively embodies language action that initiates other levels of action; it goes beyond the conceptualizing with which it begins. I tend to emphasize what I call the axial principle.

Charles Bernstein and I have been discussing the importance of bringing attention to Madeline as poet; that needs to be done in a sort of double perspective of her work as poet and her work with Arakawa. I do not see the issue as only relating to their Reversible Destiny project, but as having a place in the history and evolution of poetics at large. This is not to separate the issues ultimately but to recognize the importance of offering different perspectives in order to actually see the poetics. The success or failure of the Reversible Destiny project in the terms with which they came to present it does not frame the whole discussion of their contribution to poetics, which I take to be radical and of indeterminate long-range effect.” George Quasha, email exchange May/June 2014

For more on the idea of a principle poetics, see George Quasha’s essay – Seeing From Between: Toward a Poetics of Interloping http://www.poetryfoundation.org/harriet/2014/04/seeing-from-between-toward-a-poetics-of-interloping/?woo